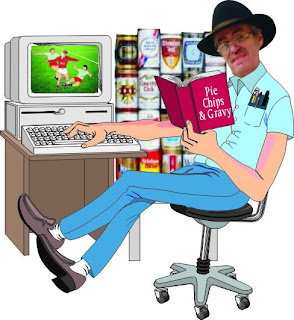 Today I'm honoured to have as my guest my writing mentor, my friend, my editor, writer, author and owner of Café Spike an online magazine. Ian Youngs also known as Skoob1999 and Martin Shuttlecock.

Ian welcome and thank you not just for being my guest today but for the magic you sprinkle into to my fictional stories In Fantasies From The Kitchen Sink and the adventures of Fifi La Mott over at Café Spike. It's lovely to have you here.

You're welcome Fiona. I'm never sure where I am most of the time and I don't like talking about myself a lot because I'm basically very boring.

Where did it all begin, and when did you first start tapping the keyboard and sending your stories into Cyber Space ?

It all started in Hope Hospital, Salford. That's where I was born, just down the road from Old Trafford. And The Cliff, United's old training ground was just down the road from where I lived as a child so I'm naturally a United fan, although I went to Maine Road before I ever went to Old Trafford. I was forced into that and always tried to avoid the place. I survived by some kind of fluke and kind of drifted through life until I got to where I am today. I live down on the south coast now, but that's a long, long story. I'm still a Northern monkey at heart, the type who likes beer, fags and pies. I love soul music too - the late great Marvin Gaye was lucky enough to be in the same room as me twice at the Apollo down Ardwick Green back in the day. He did a bit of singing and piano playing. I just sat there listening.

As regards keyboard tapping - I saw a website and decided to have a go at writing comedy articles. I've been writing for as long as I can remember, I suppose because I just like writing. It's hard to explain. I used to work for a big multi-national corporation and used to make up joke posters that used to get faxed all over the world, which was nice. It was all happy days for quite a long time writing articles for the spoof news website, until the realisation came to me that some people just do that stuff for some kind of ego trip, with no respect for their readers. Basically there were people conning readers into clicking on headlines when there was little, if anything of any substance behind the headline.

A group of us got together and tried to change things. We tried to persuade people to forget about amassing points and concentrate on writing genuinely funny and/or interesting pieces as opposed to knob jokes and celebrity gossip stuff. In the end we got shouted down and the points whores won, so we moved on. That site's still going but in my opinion it isn't a patch on what it was when we were there - or what it potentially could have been.

Café Spike came about by accident really. It was never my intention to take the reins, but after a couple of other attempts to set a website up by writing mates failed I just went ahead and did it. I hadn't a clue what I was doing and still don't really. It's been a steep learning curve but I think we're getting there.

Where do you hope to take Café Spike in the future?

Wherever the contributors want to take it. I'm hoping to have a place where people can write and get published without too many restrictions. One thing I've learned since we got this thing rolling is that creative people don't take too kindly to being shoe-horned into boxes or restricted by over zealous guidelines. I try not to interfere. Fortunately the people writing for us seem to think along roughly the same lines so there's very little conflict. Having said that, we do like to have things properly presented so we go out of our way to get things right. Going back to the question - I'd like for us to be a fun site where people drop in to be entertained and like us enough to want to revisit. If we build some kind of fan base that'll be good enough for me.

Will we see more of your work on paper as in the next Dorking Review?

The next Dorking Review is more or less ready to roll but there was a glitch with the illustrations. I've been in touch with the editor, Gary Moore and I've pitched the idea of illustrations to a couple of artists. Hopefully I'll be able to help out on that front, and we'll be able to get things moving. I haven't given much thought to writing anything as a solo project because I have a full time job, a family and other interests and that and Café Spike mean that there isn't much time left for anything else.

Do you enjoy the editing side of the magazine?

Again, it wasn't ever my intention to get involved with that side of things, but I've noticed over the years that some writers have great ideas and come up with some very amusing stuff, yet struggle for a variety of reasons with the basics. If I can help out a little in that respect I'm more than happy to do so. Usually it's just a case of tidying up a few typos. I don't do sweeping changes to submissions because I think it's important for the writer not to have their original idea mangled beyond all recognition. I hate editing my own stuff though. That drives me mad.

Why comedy and satire?

I don't really know. It's the hardest thing to do as a writer. It's easy to make somebody cry, or get them riled up but making somebody laugh out loud is a tough call. I rarely laugh aloud at the printed word, although I recall cracking up reading 'The Wanderers' by Richard Wright and a Monty Python paperback, likewise with Spike Milligan's books, but I've laughed more since I started doing the online stuff. I'm lucky to have met a fine bunch of very funny people who've been inspirational - I don't need to name drop because they know who they are. Some of them are having difficult times at the moment for a variety of reasons and that's hard to take on a personal level sometimes because these people are friends, and it's been my privilege to get to know them.

Right - I'm off down the pub now.
http://www.cafespike.com/