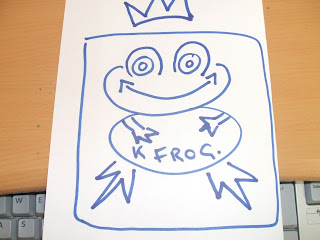 Today I'm delighted to have my cousin satirical writer  Katarina Frogpond, or known by her other pen name Edie Gray.

Katarina it's lovely to have you here today thanks so much for being my guest. Lets get straight to it.

When did you first start writing.
I can’t remember.  It was such a long time ago.  But I do remember I was writing my first sci-fi book at the age of 15.  It was about a space satellite that could talk.  I enjoyed writing it, and then I subsequently enjoyed putting it in the bin.
How did writing for The Huffington Post come about?
I started writing my comedy review column for the Huffington Post because I knew a lot of comedy writers who made me laugh and I wanted everyone to know about them too.  At the time I was writing for Spoof News, and I wrote with writers whose stories were regularly read by 10,000 people a day.    They were people like Skoob, and Iain B, and Jaggedone, who were like the graffiti artists of Political satire.  They wrote prolifically, and quite often it wouldn’t be unusual to find myself talking to a Spoof Writer on the Spoof Forum who had as many as 2000 articles in his back catalogue.   I found that impressive.   But whenever I spoke to friends who wrote in the paper journals, they didn’t know who these writers were, even though their articles were at the top of the Google pages every day.
So I started the column to highlight these Spoof writer’s work, and eventually, they began writing books and I reviewed their books, too.  But shortly after I started writing for the Huffington Post Blog, my computer got hijacked by web pirates and I began to write a bit about web pirates, too.  So my blog became quite diverse for a while, but now it has returned to being mostly about comedy writing again.  If any of my Spoof friends tell me they are writing a book, they let me know and I review it for them.   The last one was Erskine Quint, Intrepid Adventurer, Extraordinaire.  It was one of the best books I’ve read in a long time.  It’s worth a read.
Have you always loved comedy?
Yes.  I have.  It was the shining light in our dark childhood.  Our family had a lot of problems but we all had an amazing sense of humour, and we just laughed our way through the dark times.  I remember my first comedy memories were of watching The Young Ones, BlackAdder and Monty Python with my Dad and my brother.   But later I loved Father Ted, The IT Crowd, The Thick of It and Peep show.   My favourite comedy series at the moment is The Big Bang Theory, but it worries me because I think I can see a bit too much of myself in Sheldon.  Not so much the mathematical genius bit, because I can’t count, but the obsession with comic book heroes and sci-fi adventure books.  I’m thinking of getting the box set, actually.
But, its not just actual comedy that makes me laugh.   I see a lot of humour in politics.  I think Ed Miliband is very funny.   His PMQ retorts make me laugh a lot.  And even though I know his one-liners have been written by a committee of speech-writers, he does deliver them with good comic timing.  I think he should consider a career move to stand up comedy.

What do you think of your brother's self published recent success with his debut Novel Dead Broken?
I haven’t been able to read past the first 25 pages.   Not because I didn’t want to, but because Gerard wouldn’t let me.   He told me the book gets a bit disturbing after that, but I’m very proud of him for writing this book.  It nearly got to the top of the horror charts, and that is an immense success for a first time author.  He was in the number two position on the Amazon Horror Book Chart on the night James Herbert died, and I think that’s quite a historical place to have been at that moment in time.  He loved James Herbert and I think he was very sad that he didn’t get to meet him.  He also loves Iain M Banks, too and I think it’s sad that Gerard has arrived on the scene just as his heroes are leaving the stage.   I can imagine he would have loved to have gone to book festivals and Horror conventions and hung out with James and Iain to talk about horror, and sci-fi.  But now he won’t be able to do that.

You have written three Novels of your own. Will you be self-publishing them also. If so, when can we expect to see them on the Amazon shelf?


I’m not sure.  I’ve got one book that could be published at the end of the year on Amazon, if I really work hard with the editing, but the other three are stories that need illustrated.  And I’ll have to wait until my artistic skills catch up with my writing skills before I can even think of publishing those.  It’s an ongoing project that may never end, but that’s the way I like my projects.   My books are a lifelong project.  I’ve always got something on the go.   It’s just what I do.

My favourite spoof Article from you is “Margaret Thatcher’s Basement Secrets Reavealed” which I think is hilarious.   Where do you get your ideas from?
Ha. Ha.  That was one of my favourites, too.  It was part of the Tory Zombie series that I wrote for Spoof News.   I mostly wrote these stories when I was angry with the Tories, usually after watching Prime Ministers Question time, or Newsnight.  I was worried about the desensitisation of government.  The newly elected Tory party seemed to be picking on the poorest, weakest people in our society.  They seemed to be attacking disabled people and people who, for one reason or another, had found themselves dependent on benefits.   I thought the Tory policies were heartless and cruel, and that’s when I realised that it would be quite sensible and funny to portray them as zombies.
It was shortly after that, that I created the Tory Zombie series.   And after I had created my monsters, I realised I needed some heroes too - superheroes - and I decided that if the Tories were the zombies, then the veteran members of the old socialist Labour party would have to be the superheroes.   Then, obviously, they would all fight each other in a secret war.
I had so much fun with these.  But when I wrote them, I also had a lot of optimism.  I thought that the Tories were so obviously wrong in attacking the poor people in our society that someone would stop them.  But nobody did.  And I think we have entered a very sad time in our political history, and it just made me feel defeated when I watched the terrible things the Tories continued to do on Newsnight, so I stopped watching it.   And that’s why I more or less stopped writing the zombie series.   The superheroes stopped fighting and the Zombies won.
In a recent telephone conversation between us, I referred to us jokingly as the modern day Bronte's. You said Gerard would be Emily.  What did you mean by that?
I just meant his writing is a bit dark.  He tends to like to look at the dark side of reality and I like to look on the bright side.  But he’s not as miserable as Emily was.  There is a lot of humour in his books.  I think Iain Banks reader’s would understand it and Val McDiarmid talked about this kind of dark Scottish Humour when she wrote in a recent tribute to Iain Banks that “I'd grown up with the Scottish sense of humour, so I had no trouble with the notion that something so dark, so disturbing and so bleak could also be laugh-out-loud funny. I'd just never seen it written down before.”    I think this describes Gerard’s humour very well, and if Emily were alive today I think she’d be writing in this style.
That leaves the question of which one of the Bronte's is you and which one would I be. You known what Kat,  I think we will leave the answer to that question for another day!  We will save it for Café Spike!
Thanks so much everyone for dropping by.

You can follow Katarina Frogpond on Twitter @DeltaPanda
Or why not read some of Katarina's work over at The Spoof .  http://www.thespoof.com/news/uk/84946/margaret-thatchers-basement-secrets-revealed